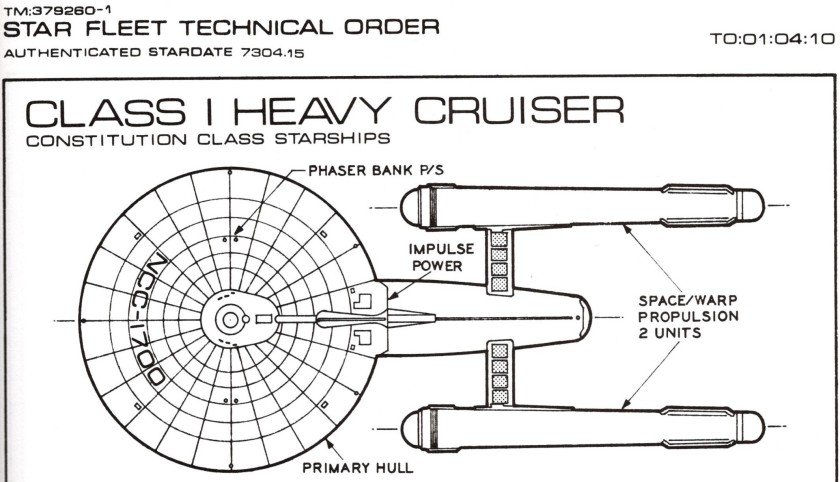 I grew up knowing that Kirk’s Enterprise was a Constitution-class ship. The designation was never stated on screen, but I was one of the chosen few with access to a trove of Star Trek facts: the Star Fleet Technical Manual.

Created by Franz Joseph and published in 1975, this book filled out imaginary worlds for me with details we never saw on screen. I knew the names of the buttons on the Vulcan lyrette, I knew Scotty had an office in Engineering, I knew McCoy’s pointy red scanner thingy was an anabolic protoplaser, I knew that the staterooms had jacuzzis, I knew that the bridge was offset 36 degrees counterclockwise from “front,” and I knew the Enterprise was a Constitution-class ship.

I knew all these things because the Technical Manual said so.

Later, I learned Joseph had based his work on a thorough study of Star Trek but that he also made up a lot of stuff. Indeed, “Constitution-class” is never said on-screen during the original series and we never see a USS Constitution or hear it referenced.

Instead, the Enterprise is actually a Starship-class ship. It said so right on the dedication plaque, just to the right of the turbolift as you exit the bridge. The plaque read:

It is just barely legible on screen, even on Blu-ray, but in this screen cap from Elaan of Troyius it is clear by the number and shape of the letters that it does not say Constitution Class. I also zoomed in on an image from The Naked Time, but it doesn’t really help. The resolution is just not there. (All episode images are from TrekCore.)

So, where did Franz Joseph get Constitution class? From a solid source: the script for Space Seed. Khan asks to study “the technical manuals on your vessel” and the script specifies one page has the words “Constitution class.” While this is an interesting production tidbit, “Constitution” is neither stated nor visible on screen.

But that script was enough for TOS uber-fan and professional Star Trek prop and model maker Greg Jein. His seminal 1975 article The Case of Jonathan Doe Starship, published in the zine T-Negative, reproduces the graphic that was meant for the episode. (Click through to his article to see this image.) But here’s the thing: the image Khan was meant to view is not a schematic of the ship but rather a component of the primary phasers. It is as logical to conclude that this is a Constitution-class component, not a part from a Constitution-class ship. (The graphic would be used later in The Trouble with Tribbles, but it is far too small to see any details.)

Star Trek production luminary Michael Okuda is on the Starship side. When Eaglemoss decided to reproduce the dedication plaque in 2016, it turned to Okuda to confirm the appearance and content of the original. I, of course, had to buy one. It’s a nice piece but Eaglemoss decided to make it smaller than the original, probably to keep the cost reasonable. I wish it had not done that or had also produced a full-sized version.

With apologies to the young fan I was, I have to go with the actual dedication plaque on the wall of the bridge. The Enterprise NCC-1701 was a Starship-class ship.

What did Gene Roddenberry and Matt Jefferies have to say about this? Read my followup article.

“But,” say Next Gen fans, “Picard said it was a Constitution class.” He did — twice. Reading out loud from the database in The Naked Now, he says: “The Constitution-class Enterprise, Captain James T. Kirk commanding.”

Later, Picard confirms the class in a touching scene in Relics as he looks around the holodeck scene Scotty created, and the engineer himself uses “starship” to define a type, not a class.

Scott: Aye. You’re familiar with them?

Picard: There’s one in the Fleet museum but then, of course, this is your Enterprise?

Scott: I actually served on two. This was the first. She was also the first ship I ever served on as Chief Engineer. You know, I served aboard eleven ships. Freighters, cruisers, starships, but this is the only one I think of, the only one I miss.

Update: Star Trek production veteran Michael Okuda explained to me why the TNG staff opted for Kirk’s ship being a Constitution class. The decision makes sense, as most fans think it is Constitution so reaction to the “error” of calling it Starship class would have been intense.

We went with “Constitution” on TNG because it satisfied fan expectations, and because it implied that there were many different types of starships, which in turn implied that Starfleet was a bigger, more interesting, more capable organization.

Postscript the second: JJ got this right at least

I really dislike the design decisions in JJ Abrams’ reboot. The Apple-store bridge, using a brewery for Engineering and, worst of all, mucking up Matt Jefferies’ sleek and beautiful ship design with bulbous nacelles. But one thing Abrams got right: that ship is Starship class.