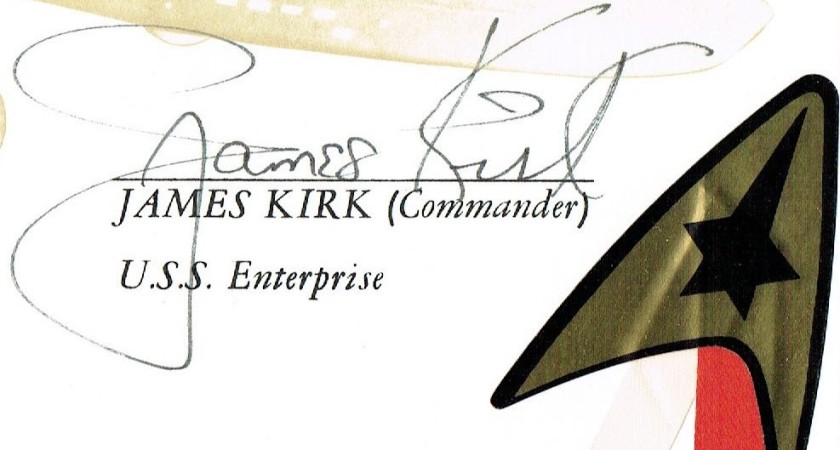 I bought a Flight Deck Officer certificate many years ago, when I was quite young, for a few dollars. I got it at a really great little sci-fi shop near Yonge and Bloor in Toronto. That store lasted only a couple of years, but that guy had some great items.

The certificate was produced by Lincoln Enterprises, according to this article on StarTrek.com.

Flight Deck Certificate – This 8 x 11” certificate came ‘signed’ by Captain Kirk and Gene Roddenberry and granted the bearer honorary membership to the USS Enterprise. Available in a standard blue version for $.50, or a deluxe version printed on parchment paper with insignia sticker and two-color ribbon for only $1.00.

I am pleased to say I have the deluxe version.

I think I knew, even back then, that the Gene Roddenberry signature was a fake, but I held out some hope. A number of years ago, Susan Sackett, Roddenberry’s assistant during the TNG years and the author of Inside Trek: My Secret Life with Star Trek Creator Gene Roddenberry, was kind enough to review a scan of my certificate and inform me that it is neither Roddenberry’s signature nor her own. It would have been cool if Sackett had been the one to sign my official welcome to “Star Trek duty.”