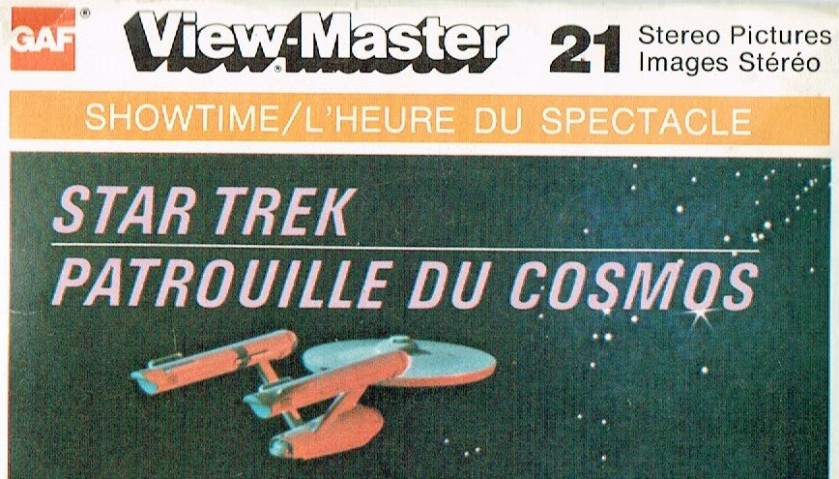 Ever find $20 in a jacket you haven’t worn for a while? That just happened to me, except it was Star Trek View-Master reels in a storage box.

I was looking for a specific collectible and found instead the Star Trek and The Motion Picture View-Master sets. And then I got another surprise: the second sleeve also contains the three Wrath of Khan discs.

I have no recollection of buying these, so it was a fun moment. The only downside is that View-Master’s first Star Trek project was The Omega Glory, which I consider the nadir of TOS.

Gene Roddenberry wrote The Omega Glory. It was one of three scripts considered in 1965 for the second Trek pilot, but no one really liked it. Writing of that time, production exec Herb Solow said in Inside Star Trek, “Gene Roddenberry’s script, The Omega Glory, wasn’t very good. It was unnecessary to point it out to him; he was the first to recognize the fact. It later became a less-than-mediocre series episode.”

Roddenberry revised the script and the episode was filmed in December of 1967. Perhaps recognizing some weakness in it, he wanted extra promo money spent, according to Marc Cushman’s These are the Voyages, Season Two. He requested a full-page ad in the trade papers, suggested it could launch the third season, asked for some on-air promos, and tried to convince a Hollywood Reporter writer to cover it. All these were rejected.

Finally, Cushman writes, “Roddenberry struck a deal with GAF Corporation to release The Omega Glory as a View-Master 3-D disc set.” That would shine at least a small spotlight on the script. Other sources say that Omega just happened to be the episode filming when the GAF photographer showed up, but Cushman’s claim makes sense in the context.

The episode has its defenders. Dorothy Fontana said “I didn’t think it was our best episode. However, I always did like the speech that Kirk says about the ‘words’… ‘We the People’ was really a great speech and Bill delivered it well.”

Sure. And Cushman writes that its strong points include the performances from William Shatner and Morgan Woodward, the fight sequences and the production values. But even he has to acknowledge:

…one can’t help but squirm a bit when the tattered flag of the United States is paraded across our television screens to the accompaniment of “The Star-Spangled Banner.” For many, it all seemed rather self-glorifying for this U.S. made show.

The script employs Roddenberry’s parallel-worlds concept, which posits that other planets could experience a history similar to Earth’s. I wrote about the origins of that here. It’s a dubious idea but it saved money by allowing the use of standing sets and existing costumes in stories like Miri and Bread and Circuses. But in Omega, the premise is stretched to breaking. Another Gouverneur Morris writing those words in the Constitution, for another United States, word for word, in the same order, with “We the People…” at the top in the same larger calligraphy. It’s ridiculous.

Spock understates it when he says “The parallel is almost too close, Captain.”

Done in Miri to save money, we can accept a world and a city that looks similar to Earth. Done here, with the same document, country and flag, it comes across as jingoistic, and the value statement it makes about American culture is not consistent with the equality message in Arena, The Devil in the Dark and The Corbomite Maneuver.

I also dislike The Omega Glory because it shows a starship captain committing mass murder, and seemingly planning genocide if he can only get enough weapons. I want to believe in the people of the Federation; I have the same issue with historian John Gill in Patterns of Force.

When people discuss the weakest TOS episodes, they fault The Alternative Factor or Spock’s Brain, but those are simply bad episodes. That’s inevitable in any series. Consider another unpopular episode: Plato’s Stepchildren. Yes, there is the cringe-inducing scene of Spock dancing near his captain’s head and Kirk neighing like a horse, but the philosophy of that episode is spot-on. Kirk tells Alexander: “…where I come from, size, shape, or color makes no difference…” That is a Star Trek message, but in The Omega Glory, it is the philosophy that’s wrong, and that makes it the worst of the series.

But there are two Omega bright spots. First, it was at the end of this episode that NBC announced the series would return for another season. Second, when Gene Coon was handed Roddenberry’s original 1965 script to rework, he was so unenthused by it that he instead wrote two original pieces: Errand of Mercy and The Devil in the Dark. So, in a backhanded way, The Omega Glory is responsible for two of the strongest episodes.

A fun story about the cover photo of the TOS envelope: the ship in the foreground is the original three-foot Enterprise model, and the Exeter in the background is an AMT model. The model worked in The Doomsday Machine and it works here.

After finding these discs, I bought an old View-Master viewer. Seeing these scenes in 3D is magical. One shot from Omega of Uhura and Sulu at her station makes you feel like you could walk right onto the bridge with them. And if you look closely, Nichelle Nichols appears to be studying a script open on her lap.

Update: collection completed. Just after I wrote this, I acquired Mr. Spock’s Time Trek, which recounts the animated episode Yesteryear. I now have all four of the TOS sets; there is a TNG set but I only collect TOS.

I also found these kids’ records, still sealed in plastic, two books from 1978 and 1977, and a lot of other stuff. So look through your storage boxes. You may have some forgotten Star Trek treasures.

Postscript: Star Trek: Insurrection is a retelling of The Omega Glory, but almost no one ever notices that.